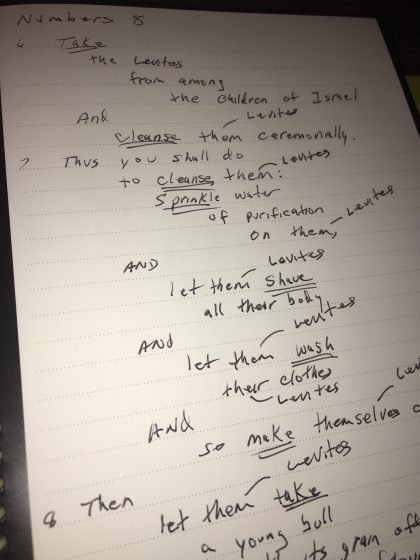 Part of the Levitical priestly duties were performed out in the open air but within the fence made of cloth and delineating the area dedicated to the tabernacle. The other part of their service was accomplished in the Holy place. The Holy place and the Most Holy place, (or the Holy of Holies) shared the same roof made up of several layers of animal skins and cloth. The two places were separated by a thick curtain. In the larger part, the Priest carried out their daily duties, with the Most Holy Place being reserved for the once a year service assigned to the high priest.

The roof extended across the top and went all the way to the ground. It was so thick it would have been difficult, if not impossible, to work without some artificial light source. You find the lampstand described in the first four verses of the chapter, which took care of the darkness problem.

The remainder of chapter eight is about the Levites. Let’s take a peek at verses six through ten.

6       “Take the Levites from among the children of Israel and cleanse them ceremonially.

7       Thus you shall do to them to cleanse them: Sprinkle water of purification on them, and let them shave all their body, and let them wash their clothes, and so make themselves clean.

8       Then let them take a young bull with its grain offering of fine flour mixed with oil, and you shall take another young bull as a sin offering.

9       And you shall bring the Levites before the tabernacle of meeting, and you shall gather together the whole congregation of the children of Israel.

After reading this passage many, many times, I rewrote Numbers 8:6-10 in a notebook using an indentation method I find helpful. I then made a few notes identifying the antecedents each time I came across the pronoun them/themselves. Recognizing that YHWH God had instructed Moses concerning the Levitical Priesthood, I then went through these verses and identified the active verbs by double underlining them.

The verbs identified are:

The word “take” denotes the action of separating the thing being taken from the group of things from which it was a member. In verse six Moses was instructed to take the Levites from the rest of the Nation. God had called them out for specific service in the tabernacle.

Once removed, the Levites were sanctified or cleansed through a particular process commanded by YHWH. I should point out that in the New King James translation the word “ceremonially” at the end of verse six is italicized which means it is not a word in Hebrew (source language). It was because the translators wanted to make sure you understood God wasn’t saying “you’re dirty, take a bath”. Personally, I think context does a fine job explaining without the use of the inserted word.

The other thing “take(n)” were young bulls for sacrifice in the Levites sanctification process. These bulls were separated from the herd because they were identified for use in service to the covenant God YHWH.

This process of separating the Levites out from the rest of Israel and to service involved the verbs sprinkle, shave, and wash as read in verse seven.

Once properly prepared, the Levites were to be brought to the tabernacle, where they would be conscripted into service, according to verse nine.

Next Moses was commanded to bring the remaining tribes around the Levites that had been separated out from them. They were not to be re-integrated, but rather, sort of confirmed by the people in the service to which God called them.

Once gathered around the Levites the rest of the tribes were commanded to lay (or place) their hands upon the Levites. We won’t talk about it until next time, but if you keep reading verse eleven explains why.

Look at verse ten again. I find it interesting that once taken and properly prepared, the Levites were then ready to be presented both to the people and YHWH. The very service they were entering into made them ones who stood in the gap between the nation Israel and the Holy God YHWH.

I’m sure you noticed I did not do an exhaustive job of explaining these verses. I would like you to notice God’s instructions were very specific and there were multiple actors (or entities performing actions). God Spoke and gave the instructions. Moses listened and carried out God’s word. The Levites prepared themselves and made offerings, and the remaining tribes laid their hands on the Levites. I think next week’s part 2 will help us make sense of this week’s part 1. To me, this passage is one more evidence that it is not the devil that is in the details, but rather our most loving God YHWH.