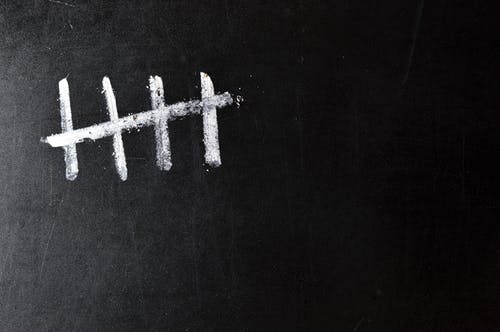 I was thinking about it as I was preparing to write today’s article, sometimes when I read the Bible I feel like I spend too much time in the details. I seem to get easily distracted by some literary nuance, or lesser detail, and like a dog that suddenly encounters a rabbit, I dart off on some rabbit trail – who knows if I’ll ever return. Then when I’m done I often look back on the time I spent and feel like I didn’t glean enough of the important details from the passage. Do you ever feel that way? Or maybe you are constantly reading past the details saying to yourself, “I’ll come back and look that up later”, but you never seem to come back. To be honest I find myself bouncing between the two. Sometimes I think, “there’s got to be a balance between these two extremes”.

But maybe we too often allow introspection to short circuit our time in the word of God. Maybe it’s ok to read straight through the scriptures without coming up for air? Maybe it’s ok to dig into the details stopping to behold a single tree in the veritable forest of truth?

Have you ever been prevented from spending consistent time reading the Holy Bible because you feel like if you don’t have a certain amount of time to devote to it, it just seems too shallow a pursuit?

So you don’t have an hour or half an hour for daily devotions, don’t you think five minutes a day is better than nothing? I try to limit these devotional posts to two typed pages. Most people can read those two pages in four or five minutes, maybe faster. What if we spent five minutes reading two pages of the Bible every day? I’m pretty sure we’d be blessed, don’t you agree?

You may think I’m being trivial or trite, but listen, the Holy Bible is important because it is the Word of God. Hebrews chapter four talks about laboring to enter into the rest of God. Consider the following:

11       Let us therefore be diligent to enter that rest, lest anyone fall according to the same example of disobedience.

12       For the word of God is living and powerful, and sharper than any two-edged sword, piercing even to the division of soul and spirit, and of joints and marrow, and is a discerner of the thoughts and intents of the heart.

13       And there is no creature hidden from His sight, but all things are naked and open to the eyes of Him to whom we must give account.

If we truly believe that the word of God is living and powerful, why wouldn’t we spend time in it?

Remember I said I’m prone to rabbit trails? I had every intention to introduce Numbers 8:21, and look where we ended up! We have six more verses to consider in Chapter eight before moving on to chapter nine. Let’s consider verses twenty one and twenty two together.

21       And the Levites purified themselves and washed their clothes; then Aaron presented them like a wave offering before the LORD, and Aaron made atonement for them to cleanse them.

22       After that the Levites went in to do their work in the tabernacle of meeting before Aaron and his sons; as the LORD commanded Moses concerning the Levites, so they did to them.

The New King James translators felt it important to point out that the Levites were not a wave offering, they were only “like” a wave offering, so they inserted the word “like” even though it is not in the original Hebrew.

The first place the “wave offering” is described in the Old Testament is found in Exodus 29:22-24.

22       “Also you shall take the fat of the ram, the fat tail, the fat that covers the entrails, the fatty lobe attached to the liver, the two kidneys and the fat on them, the right thigh (for it is a ram of consecration),

23       one loaf of bread, one cake made with oil, and one wafer from the basket of the unleavened bread that is before the LORD;

Reading the Exodus passage it becomes quite clear, even without the word “like”, that the Levites were not an actual wave offering, but a picture of it.

I can’t spend a lot of time studying the wave offering but consider what the Lexham Bible Dictionary has to say about it.

WAVE OFFERING (תְּנוּפָה, tenuphah; ἀφόρισμα, aphorisma). Portions of peace offerings, such as firstfruits or sheaves of barley, which were waved by priests as a token of a special presentation to God (Exod 29:24–27; Lev 7:20–34, 10:14–15). For further information, see these articles: Offerings; Firstfruits.

And look at this from The Bible Knowledge Commentary.

Let me leave you with a final observation of these few verses in Numbers. The ritualistic actions described here and followed by Moses, Aaron and the Priests were important because they were prescribed by God. The Old Testament Biblical audience in our passage was obeying God, shouldn’t we too set our hearts to obey Him?