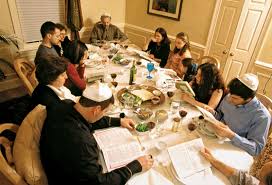 Numbers 1:1 clearly states, “…on the first day of the second month, in the second year after they had come out of the land of Egypt…”

And Numbers 9:1 says, “…in the first month of the second year after they had come out of the land of Egypt…”.

I don’t want to cause confusion with my comments, however, I think it is important to point out that Numbers nine is not the only chapter out of order. It would take me a little bit of work to determine exactly where the out of order sequence begins, but any passage in Numbers that talks about God instructing Moses to set up the tabernacle for the first time, and Moses actually doing it, happened before chapter one. The evidence for this is in the following two verses in Exodus.

Why did Yahweh God instruct Moses to write the sequence of events out of order? Some people speculate, but I personally have no idea. I do know that chapter nine is exactly where it needs to be in the book of Numbers. It fits quite well being between chapters eight and ten.

6       Now there were certain men who were defiled by a human corpse, so that they could not keep the Passover on that day; and they came before Moses and Aaron that day.

8       And Moses said to them, “Stand still, that I may hear what the LORD will command concerning you.”

These men were ceremonially defiled by a dead body, probably because it was their responsibility to bury the body, which prevented them from observing the Passover. They approach Moses about it and in verse eight Moses says in effect, “wait here, I’ll ask God about it”.

Yahweh actually responds with more information than Moses’ inquiry covered. Yahweh tells Moses anyone defiled by a dead body may keep the Passover on the same day (the 14th) of the following month. He also says this is the day that a traveler who missed the Passover may also observe it (14). Yahweh also states that the “stranger” or proselyte to Judaism may observe the Passover.

13       But the man who is clean and is not on a journey, and ceases to keep the Passover, that same person shall be cut off from among his people, because he did not bring the offering of the LORD at its appointed time; that man shall bear his sin.

Wow! At first glance, it seems harsh! Someone gets kicked out of the nation because he doesn’t keep the feast? He’ll bear his sin? Why? Look at verse thirteen, “…because he did not bring the offering of the LORD…”

Did you notice that the Passover is not just a feast? It is referred to as an offering. The men who originally brought the issue up to Moses understood this. Look at verse seven again.

So what’s going on here? Well, when we understand that the Passover event and subsequent observances are actually a picture of Jesus Christ then it makes perfect sense. It’s not one’s own merit or cleanliness that causes God to “pass over” and not destroy the sinner. It is the righteousness of Jesus the Lamb of God sacrificed on a cross instead of us that saves us. You can’t be good enough. You can’t be clean enough. All the Old Testament individuals and the modern-day man must do is believe in the finished work of our savior Jesus the Christ.