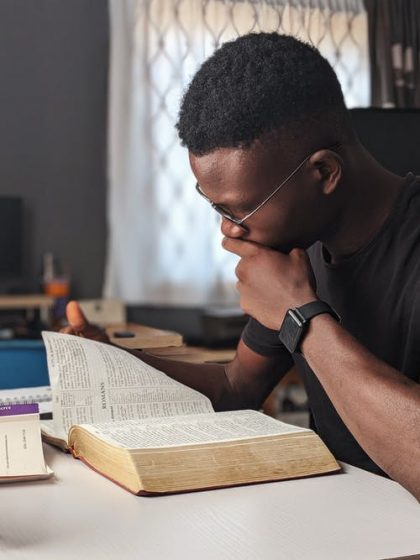 We’ve been working our way through the book of Numbers, with a few detours to other scriptural passages along the way. According to the Bible, the author of the first five books of the Bible was Moses. I watched a movie last night named “Patterns of Evidence: The Moses Controversy”.

Not that I was surprised, but the film reveals that many scholars contest Moses’ authorship of the first five books of the Bible. The claim is these early books were probably written a couple of hundred years after Moses. The skeptics further claim that the text had been embellished as it was passed down orally through the generations before it was captured on parchment. If Moses didn’t write the books of Genesis through Deuteronomy, then the Bible would not be reliable as the word of God. Furthermore, if Moses didn’t write the books then either Jesus was a liar, or He didn’t actually say what was recorded in John 5:45-47. If you want more details watch the film – I highly recommend it.

45  Do not think that I shall accuse you to the Father; there is one who accuses you—Moses, in whom you trust.
46  For if you believed Moses, you would believe Me; for he wrote about Me.
47  But if you do not believe his writings, how will you believe My words?”

Maybe I’ll give a pass to the non-believing skeptic. After all, how could you expect them to recognize the validity in a text supposedly given by a God they don’t believe in. However, I believe if they would read and study the Bible as a whole they would find enough verifiable evidence to establish the accuracy and dependability of God’s Holy Book.

But believers I extend no such pass to you. What do you believe? Is science, specifically archaeology, or the archaeologist the final authority on the veracity of the scriptures? Can you be persuaded, given enough supposed scientific evidence that the Bible isn’t true?

How important is the Bible in your life? The answer of course is found in how much time you spend reading and studying it. LifeWay Research conducted a study recently which is where the following chart was produced.

Being honest, where would you place yourself on the graph? 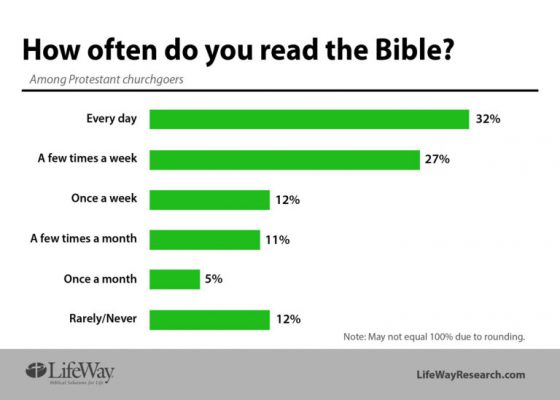 Is it any wonder our nation is in turmoil right now?

Look at these statistics from All.org

In the United States, we’ve overruled God’s definition of marriage of one man and one woman to be man/woman, man/man, woman/woman.

And now we burn down buildings, steal (they call it looting) from businesses, disrespect the national anthem and what it stands for by taking a knee, ambush cops, call for their murder all in the name of protest!

I could go on and on, but the point is when believers do not read the Bible, they don’t believe their Bible, and then they won’t talk about what’s in the Bible because frankly, they don’t know what’s in it! Our world around us pays the price for our silence.

I want to encourage you. Read the Bible. Study the Bible. Then talk about what’s in the Bible. Tell the unbelievers in your life the truth, tell them God’s truth! Don’t have time? Give something up. Have a hard time reading/studying the scriptures? Fight, Fight, Fight! Be persistent but be in the Word of God! The chart I’ve included is an embarrassment to the body of Christ! How about if you and I together get those numbers up there where they should be – let’s shoot for 100% on the chart!

This is why I write about the Bible every week.

39       You search the Scriptures, for in them you think you have eternal life; and these are they which testify of Me.

Come on Christians, we can do better!