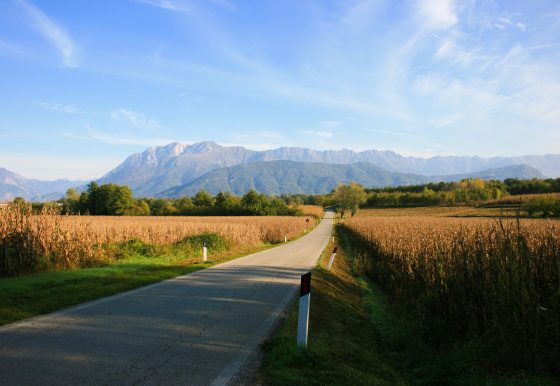 We have been studying the book of Amos. Last time we got our feet wet in the first few verses of chapter six, so it makes sense we would continue our study of Amos six by first considering a verse in the New Testament book of Matthew, right? Well, we’ll see.

Almost every well built road has three main characteristics. One, the road itself, a left ditch, and a right ditch. When you think of the ditches on either side of the road what immediately comes to mind? Do you see the ditches as a bad thing? If you answered yes, you are probably thinking about staying on the road, and out of the ditches, in-order to arrive safely at your destination. If instead, the thought of a road’s ditches struck you as a good thing you were probably thinking about the purpose of the ditches. They are primarily designed to keep the road free of water and maybe snow, so the traveler can proceed unencumbered.

If the traveler finds himself too close to a ditch he makes a correction in order to keep from entering the ditch. If he over corrects he will quickly find himself heading toward the opposite ditch, which again is not the best way to reach his destination with relative speed and safety.

I know the metaphor is basic, and you probably already suspect why I employed it, but I thought it a good launching off point. In my analogy the road is the word of God. The ditches on either side of the road can be thought of as man’s extreme or incorrect interpretation of the Bible. We are encouraged to stay out of the ditches and on the sure path of the word of God. We should endeavor to avoid bouncing from ditch to ditch, like a steel ball zig zagging through a pinball machine moving from one bad interpretation to the next.

23    Then Jesus said to His disciples, “Assuredly, I say to you that it is hard for a rich man to enter the kingdom of heaven.

I can’t tell you the number of times I’ve heard people declaring Matthew 19:23 to be a proof text demonstrating that Christians must be poor, or at very least not wealthy. Poor equals godly, rich equals carnal, maybe even not saved. This position is simply not scriptural. A quick survey of salvation scriptures almost effortlessly debunks this bad doctrine. However, we are not going to spend time arguing this point.

Sometimes, it isn’t the obvious error that is the most dangerous, but rather the subtle deceptions that creep in to our belief system almost undetected. Maybe you’ve never heard someone directly addressing Matthew 19:23, but you’ve come across it in your devotional readings. You’ve reach the conclusion, like so many others, that it’s just safer to avoid wealth. To make matters worse we come to our passage in Amos chapter six.

In Amos 6:3-7 There is a woe issued against those who do things like:

Let’s think about this a minute. Consider the Patriarchs. Everyone of them were blessed by the LORD with great material wealth. Abraham, Isaac, Israel (first named Jacob), all acquired significant wealth by walking with the LORD their God. And what about King Solomon? Remember the story? God appeared to Solomon and told him to ask for something. Solomon said something like give me wisdom to rule this people you have given me. Then God said, “yep! You got it!”

But then God said to Solomon something interesting in 1 Kings 3:13.

13     And I have also given you what you have not asked: both riches and honor, so that there shall not be anyone like you among the kings all your days.

Do you see that? God gave Solomon great wealth. It is said that Solomon was the wealthiest man who ever lived!

It is true that Solomon turned away from God in the later days of his life, but it wasn’t his wealth that caused his downfall. It was taking pagan wives, in defiance of God’s Holy instruction that pulled Solomon’s heart away from God.

If you read the Amos six passage again I think you will discover that wealth wasn’t the problem. The problem was they enjoyed their wealth and totally ignored the poor. Their wealth was their anchor, the foundation of their lives, to the exclusion of everything and everyone else.

In whatever station of life you find yourself set Jesus Christ up as your sure salvation, your foundation. Trust only in Him. Are you poor? Honour the Lord in your lack. Are you wealthy? Honor the Lord with your wealth.