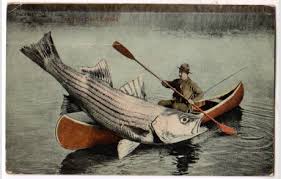 If we define exaggeration as inflating the facts about a thing to the point of distorting the truth about that which is represented, then we can know for sure that God never exaggerates. We know that God does not distort the truth because of the declaration found in Numbers 23:19.

Keep in mind the above verse as you read the following verses.

“When the plowman shall overtake the reaper,

And the treader of grapes him who sows seed;

The mountains shall drip with sweet wine,

And all the hills shall flow with it.

14 I will bring back the captives of My people Israel;

They shall build the waste cities and inhabit them;

They shall plant vineyards and drink wine from them;

They shall also make gardens and eat fruit from them.

15 I will plant them in their land,

And no longer shall they be pulled up

From the land I have given them,”

Says the LORD your God.

As adherents to the infallibility of the Holy Bible, and adopting the position that the Bible must be interpreted literally, how do we reconcile the apparent contradiction we see between Numbers 23:19 and Amos 9:13? The Numbers verse tells us God does not lie. The Amos passage tells us the there will be such a great harvest that the harvester cannot complete his gathering by the time planting should be starting. The same is true of planting and processing grapes for wine.

So if God doesn’t lie, then it follows the Bible, being His Word, does not distort the truth. So how should we understand Amos 9:13? Does this verse really mean that the harvest will go on for months and will scarce be over before it is time to plant again? Fideism would teach (exclusive reliance in religious matters upon faith, with consequent rejection of appeals to science or philosophy. -Dictionary.com), “that’s what it says, it doesn’t matter that it makes no sense, that’s what it means”.

If you are a fideist you will not want to read beyond this point.

Let me reassert that God does not lie, nor does he exaggerate. If you’ve been a student of the Bible for any length of time you will recognize that the divine Author, along with the many human authors of the Bible do employee a wide range of literary methods used to communicate truth. This is likely not an exhaustive list of literary devices, but they are poetry, similes (this like that), metaphors (symbol represents a thing), Hypocatastasis (two things being compared only one is named and the other is implied), synecdoche (a part represents the whole or vice-versa).

In the passage we are considering today we encounter the literary device called hyperbole. Hyperbole can be defined as exaggerated statements or claims not meant to be taken literally. They are designed to draw attention to, underscore, or bold some fact the author wishes to communicate. So what fact is being bolded in Amos 9:13?

Amos 9:11-15 is about God doing a work of restoration at the end of the age after He has poured out His wrath completing His judgment. Verse thirteen is a wonderful verse declaring that God’s people will enjoy the bounty of His provision like never before. This incredible food production from the land will be a direct result of the work God Himself has performed as stated in 9:14-15.

What an incredible demonstration of God’s love and mercy extended toward His people. He could have easily wiped them from existence – they deserved it! But instead, Yahweh judges their sin, pours out His wrath, then lovingly draws them back to Himself and provides for them beyond their wildest imagination!

I know I’ve said it before, but I just can’t help saying it again. God is so good! Yahweh is worthy of all praise and worship!