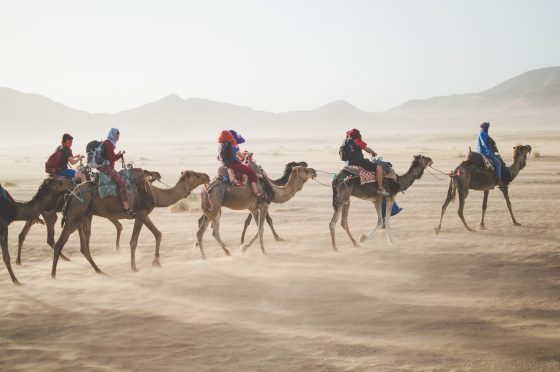 I would encourage you to read at least Amos chapters one and two. In Amos 1:3-2:16, we find the prophetic messages of punishment upon eight specific people groups. Though the details differ, the prophet uses a repeating pattern in each of the messages.

As I see it, each of the eight messages share the following literary components:

Amos starts each prophetic declaration with “Thus says the LORD”. Why is this noteworthy? Keep in mind six of the eight peoples were not in covenant relationship with the LORD (Yahweh), only Judah and Israel were, albeit in a current state of broken covenant. The message needed to be clear from the very beginning. This message is not from one of the false, pagan gods of the era. This is not Amos’ message. It is not some personal opinion of what could happen. This message is from the one and only covenant GOD. This is Yahweh, the GOD you all have heard about. God is roaring His judgement against them (Amos 1:2)!

We previously discussed “For three transgressions of….and for four”. We discovered it is not counting three and four sins, but rather demonstrating each place is guilty of prolonged and numerous sins. You might say they could be no more wicked in their unrighteous deeds.

“I will not turn away its punishment”, is directly related to the previous idea that they habitually practiced wickness. God is communicating, “because they have not repented, or turned away from their wickedness I will not repent, or turn away from exacting their punishment.”

In each of the declarations of punishment God has Amos explain why they are being punished. It’s because they did something wicked against someone. I’ve tried to chart this in an effort to give us a bird’s eye view of both the perpetrator and the victim.

At its most atomic level, all transgression can accurately be defined as sin. The details of the enumerated transgressions in the book of Amos are clearly defined as against a people or against Yahweh. I do not wish to veer into a theological discussion of sin. However, we should remember that all sin, without exception is against God. Starting with the offspring of Adam and Eve, everyone of every age has been born a sinner, and then verified their sinful condition by committing a sinful act of their very own (Romans 3:23).

I would also like to argue that all sin, without exception is against someone besides God. People suffer the consequences of sin. Even if the only other victim is the one committing the act, there is always a human victim of sin. If we call this the foundation of sin, we can say that although each sin alway has a minimum of two victims, one may be predominant. This is what I believe Amos is identifying for us in the text.

In the Gospels Jesus was asked, “what is the greatest commandment in the law?” We find Jesus’ response in Matthew 22:37-40.

Notice the difference in both Judah and Israel in the above chart? According to the biblical text, they are the only two out of the eight identified as sinning against God. This is because they are the covenant people of God.

1 Reply to "Amos - Perpetrators and Victims"