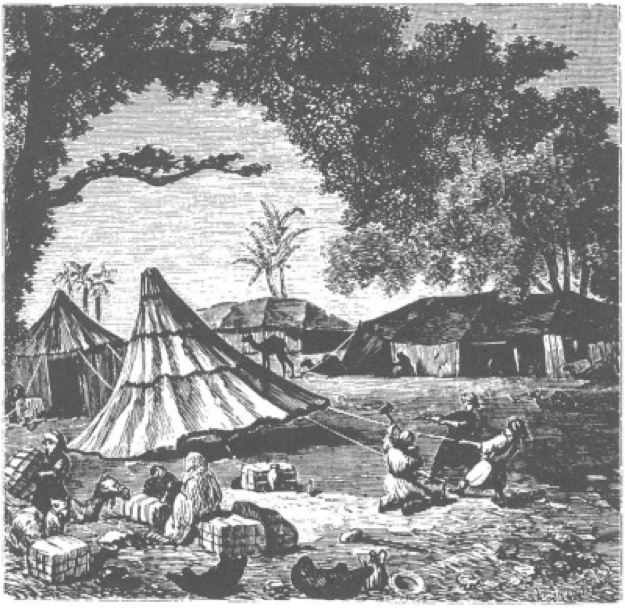 Then he took up his oracle and said:
“The utterance of Balaam the son of Beor,
The utterance of the man whose eyes are opened,
The utterance of him who hears the words of God,
Who sees the vision of the Almighty,
Who falls down, with eyes wide open:
“How lovely are your tents, O Jacob!
Your dwellings, O Israel!
Like valleys that stretch out,
Like gardens by the riverside,
Like aloes planted by the LORD,
Like cedars beside the waters.
He shall pour water from his buckets,
And his seed shall be in many waters.
“His king shall be higher than Agag,
And his kingdom shall be exalted.
“God brings him out of Egypt;
He has strength like a wild ox;
He shall consume the nations, his enemies;
He shall break their bones
And pierce them with his arrows.
‘He bows down, he lies down as a lion;
And as a lion, who shall rouse him?’
“Blessed is he who blesses you,
And cursed is he who curses you.” (NKJV)

Picking up where we left off we come to verse 6. Keeping verse 6 in context reveals the figures of speech Balaam uses to communicate just how beautiful Israel’s dwelling appear to him. He says they are like valleys, gardens, aloes, and cedars. These particular figures of speech would naturally stimulate certain responses in the mind of the hearer. The valley and gardens speak of the bounty and provision Israel enjoys by the hand of LORD.

A definition for the word “aloes” sheds some additional light on this passage. It is the Hebrew word ahalim, and simply means the Aloe tree. A quick internet search reveals the following definition.

(Heb. ‘ahalim), a fragrant wood ( Numbers 24:6 ; Psalms 45:8 ; Proverbs 7:17 ; Cant 4:14 ), the Aquilaria agallochum of botanists, or, as some suppose, the costly gum or perfume extracted from the wood. It is found in China, Siam, and Northern India, and grows to the height sometimes of 120 feet. This species is of great rarity even in India. There is another and more common species, called by Indians aghil, whence Europeans have given it the name of Lignum aquile, or eagle-wood. Aloewood was used by the Egyptians for embalming dead bodies. Nicodemus brought it (pounded aloe-wood) to embalm the body of Christ ( John 19:39 ); but whether this was the same as that mentioned elsewhere is uncertain.

The bitter aloes of the apothecary is the dried juice of the leaves Aloe vulgaris.

I believe Aloes to be indicative of the wealth and prosperity enjoyed by a nation blessed by LORD.

Cedars where great, costly, and powerful trees used in the construction of beautiful edifices. The use of the word in this passage speaks of the strength and beauty of LORD.

He shall pour water from his buckets,
And his seed shall be in many waters.
“His king shall be higher than Agag,
And his kingdom shall be exalted. (NKJV)

Reading verses 5 – 7 together we determine the antecedent for the pronoun He at the beginning of the verse to be Jacob. Jacob represents the nation Israel.

The first half of verse seven didn’t make sense to me until I compared some English translations. The ESV, NASB95, and NRSV (and there may be others) all render it either “Water will flow from his buckets” or “Water shall flow from his buckets”. A bucket is a closed container of a given size. You can only pour out of a bucket what you have previously poured into it, it is not fed by a continuous source of water. Which is probably why the NKJV (and other) translators chose to translate “pour water from”. I suspect the other translators were more accurate when they translated “water shall flow”. This rendering communicates the never ending source of water provided to the owner of the bucket, without him having to fill the bucket with water after each pouring out. In other words, God has blessed the owner of the bucket, Israel, with all he needs and more.

I present a question, instead of a hard and fast conclusion for the second half of verse seven. “And his seed shall be in many waters”, is the many waters referring to many nations? Would this be referring to the nation of Israel being “peppered” throughout the nations of the world? Amazingly, God has told us in His word exactly what He will do. We don’t have to guess His will for the nation Israel, nor for us. Getting to know God’s word is equivalent to getting to know God’s will.