(This weeks devotional is by Kaite Moon.)

My son is currently enrolled in his first-ever swimming lessons class. I’ve been amused the last couple days as I have watched him and his 4 classmates literally flail all four limbs while they try their hardest in the water. As I was visiting with another mom from the bleachers today, she began to tell me how her daughter didn’t want to return this morning because she doesn’t like to put her head under the water and the teacher is “mean” and makes them try. My own son, equally as frightened of submersion, but ever the true extravert and optimist, nevertheless calls the same teacher “Mr. Nice”. 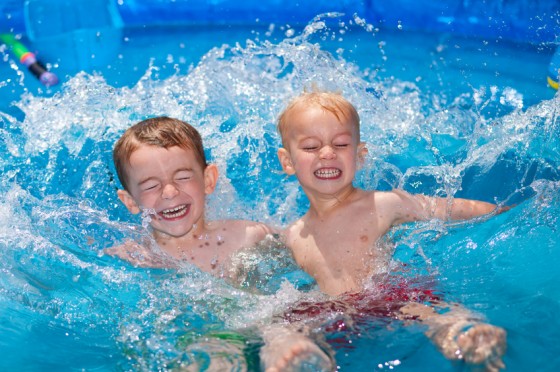 This comment about the “mean” teacher lead the other mom to ask me a question that I can’t stop thinking about. She asked if Judah, my son, typically likes the water. I responded with an enthusiastic, “YES!”

At the very same time I said “YES!” a thought raced into my mind: that’s me! Let me explain.

Just two weeks prior, we had spent a week at a lake cabin in MN and Judah spent basically the entire week in the water. He was in the water for hours every day. In fact, he cried every time he had to get out of the water. He so fully enjoyed splashing in the shallow water, playing with water toys, floating on old-fashioned inner tubes, jumping off the doc, looking at the tadpoles swimming by his feet, and sliding down the little kiddie slide. All week I called him my “fish”. He couldn’t have been happier.

My new friend, the other mother, said the same was true of her daughter. She normally LOVED the water as well.

I later got to thinking about how even though it is not the most fun, per se, to take swimming lessons, it is absolutely vital (in my opinion) for every person to take them in their life time. It doesn’t matter if you’re athletic, live near the water, going to pursue it for a career, or never swim again. Learning to swim is a life skill that could mean life or death given a sudden unexpected circumstance. I have known a grown man who never took swimming lessons, and declared no one should have to. That is until one unexpected day he found himself being rescued from drowning by his former-life-guard wife. Common sense tells us that learning how to swim doesn’t just make us look better as we swim, or make us less scared of the water, it prepares us for what may be ahead.

My darling child has gone from a natural (life-jacket wearing) fish, splashing with delight in the shallow lake water 2 weeks ago, to a hilariously flailing, unsure, yet developing swimmer in the pool today. Two weeks ago, if he had fallen in the deep end of the lake with no one around, I shudder at what could have happened. Today, well, he’d be at least one step closer to survival.

This brings me back to my point: I feel just like him.

Just this morning I was pouring my heart out to the Lord about how I feel like I’m drowning in the current seminary class I’m taking. And not because it’s too much work (which, it is PLENTY of work, trust me), but because the material we’re learning I have such a loose grasp on so far. I want to learn it and grasp it so very badly, but it’s challenging stuff. And I’m not taking to my class assignments with quite the same ease (if ANY of them are easy!!) as I normally do.

You see, like Judah and his friend in the water, it is my norm to love studying and leading and teaching. I took to it long before anyone assigned me to it. It’s long been my passion to encourage others to be students of God’s Word and, when possible, to help them through it. I’ve lead prayer groups, Bible studies, small groups, discussion groups, written devotionals, and so forth at every opportunity. And, mind you, I have made many of my own opportunities. Like Judah, I’ve splashed and played with glee in the waters of Bible study for years now.

With my recent challenges in class I’ve been tempted to think, “Maybe I can’t do this.” Or, “Maybe it

doesn’t matter after all.” Or “Maybe God hasn’t called me to this sort of work.” “Maybe this really isn’t where my Spiritual gifting is.” What I was joyously splashing around in (studying and leading others), albeit ignorantly (and dangerously misguided at times as well), I am now flailing wildly, embarrassingly, and perhaps somewhat hilariously about as I’m beginning the formal training process of learning correct methods of studying God’s Word. It used to be fun and games. Now… it’s hard work.

As all these thoughts came rushing together today, I was overcome with joy over God’s grace. Who but He could orchestrate this little series of events to encourage me as I press on in the educational journey He’s called me to? I was encouraged today, as I imagined my son one day swimming strongly and swiftly down a lane in a swim race, or through the deep parts of a lake on an early morning exercise. One day, by God’s grace and mercy, and through His Spirit and power alone, I will navigate proper hermeneutics with more strength and ‘ease’ than I do now. And better yet, with maturity and dignity.

God’s Word is very challenging, and never won’t be. But learning proper skills in how to read and interpret it is not only crucial, it is life life-giving. Not only to the person interpreting (please Lord, may this be so!!), but also to others God may call us to one day minister to. It’s not just for the pastor, speaker or leader to learn how to study the Bible. It’s important for every one of us! I’m personally learning that I can’t skip this step in my life. I can’t take a shortcut out. It’s going to be hard. I’m going to make many mistakes, be corrected many times, and look like a flailing idiot to be sure. But as D.L. Cooper’s wife once said to him, “the callings of God are not repented of, and God’s commands are His enablings… go to school again and learn more truth.”

Seldom in this life are we called to something grand and greater than us that won’t cost us as well. But oh, know this: the cost is worth it. Worth every ounce of pride lost. Every drop of sweat and blood. Of ours, yes. And also Christ’s, whose glory we seek! In Phil 4:13 Paul speaks into costly and strenuous times caused by following God’s will when he says, “I can do all things through Christ, who strengthens me.” Indeed.

To Him be the glory and dominion! Forever and ever.

Be diligent to present yourself approved to God as a workman who does not need to be ashamed, accurately handling the word of truth. 2 Timothy 2:15

**For further reading on how to interpret the Bible, I recommend the book Grasping God’s Word: A Hands-on Approach to Reading, Interpreting, and Applying the Bible by J. Scott Duvall and J. Daniel Hays. It is a fairly easy and entertaining read, with a lot of practical application—a great book for anyone interested in growing in their relationship with God through His Word.

2 Replies to "Learning To Swim"