Look before you leap

Have you ever been tempted to become a stuntman?

When I was young, I would guess six or seven years-old, I was very adventuresome. One year I was with my family at a reunion on my uncle’s farm. My mother came from a large family so the reunions were huge. This meant there were many kids and we played hard. In the middle of the farmyard, there was a stack of baled hay. To a kid the stack looked like it went up forever. My uncle had left a conveyer in place that ended at the top of the haystack. Several of the kids, me included, used the conveyer to get to the top of the stack. You could see the world from up there. 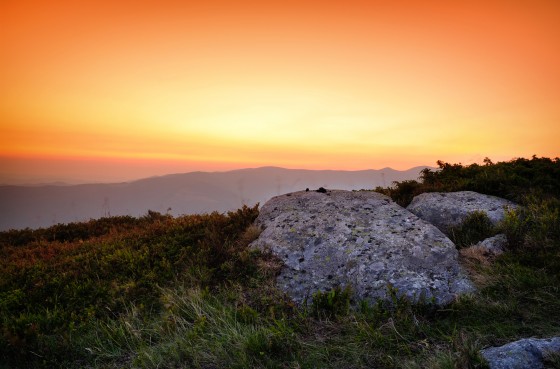 We had two choices for coming down the stack. We could take the sissy way down—the conveyer—or more compellingly, we could climb down the side of the stack clinging to the twine that held the bales together. A couple of the older boys climbed down the side. I certainly didn’t want to be outdone, so I followed. I hadn’t gone far when it happened. In fact, I don’t really know what happened. The next thing I remember is someone picking me up off the ground. Then I blacked-out again. Then I remember being walked toward the house—I was in a complete daze. Once again, before we got to the house, I backed-out. Then I remember regaining consciousness lying on a couch with someone dabbing a wet cloth on my forehead. You guessed it, I again blacked-out. I woke up in the car some time later.

I don’t really remember that much about the entire episode. My mother filled in some of the gaps. She said that when I fell, I mostly went headfirst to the ground. I did manage to hit a piece of wood lying on the ground. In reality, I my neck should have been broken. As I think back on this episode in my life, I am amazed at how the great view of the world so quickly disintegrated into a fog with no clarity at all. I went from the top of the world to near total destruction in a heartbeat. I learned one thing that day—I was no stuntman. They have enough foresight to plan their falls.

Jesus was no stuntman

One day, Jesus also found Himself on a high pinnacle. He had just gone forty days of fasting in the wilderness when Satan came to tempt Him. Satan had already tempted Jesus by trying to convince Him to meet His very real need apart from depending on God. Satan had tried to convince Jesus to meet His needs Satan’s way instead of God’s way—the devil wants Jesus (and us) to meet our legitimate needs in illegitimate ways. Jesus simply shrugged Satan off by quoting Scripture, “Man shall not live by bread alone, but by every word that proceeds from the mouth of God” (Matt 4:4).

Then the devil took Him into the Holy City and set Him on the pinnacle of the temple. This was the highest point in the city. Jesus would have been able to see the entire city. Satan then offered this temptation,

“If You are the Son of God, throw Yourself down. For it is written: ‘He shall give His angels charge over you,’ and, In their hands they shall bear you up,

Satan is not questioning the fact that Jesus is the Son of God. He already knows that. Rather, he is saying since you are the Son of God you need to throw Yourself down from this pinnacle. He is tempting Jesus to use His power to do the dramatic stunts that will draw the people to Himself—at least Satan wants Jesus to draw people to Himself in this way. Satan is challenging Jesus to be a stuntman. Since Jesus dismissed Satan earlier by quoting Scripture, now Satan will attempt to use Scripture to draw Jesus away from His mission.

Now, in a very subtle way, Satan is reminding Jesus about the Malachi’s prophecy regarding the Messiah—“Behold, I send My messenger, And he will prepare the way before Me. And the Lord, whom you seek, Will suddenly come to His temple, Even the Messenger of the covenant, In whom you delight. Behold, He is coming,” Says the Lord of hosts” (Mal 3:1). This prophecy had led to the common belief among Jews that the Messiah would suddenly appear in the sky, coming own to His temple. Satan was urging Jesus to do what the people expected from Him. Satan was urging Jesus to make some marvelous display of His power.

Satan then continues again by using the Scriptures—the devil says His angels will protect you (Ps 91:12). These are strong arguments. Satan is tempting Jesus to use His power to draw the crowds below to Himself. This sounds so good. How can this possibly be a bad thing? The people would see His great and mighty deeds and they would believe that He is the Messiah.

We must notice that Satan leaves out the context of Psalms 91:12—“To keep you in all your ways.” According to the Psalmist, a person is protected only when he is following the Lord’s will. Jesus knew to cast Himself down from the pinnacle of the temple in some dramatic display to accommodate Himself to the people’s thinking would not have been God’s will.

Jesus again responded to Satan with Scripture. This time He quoted from Deuteronomy— You shall not tempt the Lord your God as you tempted Him in Massah (Deut 6:16). In this passage, the Israelites are reminded not to but God to the test as they did when they were in the wilderness without water. Rather than trusting God in this trial, they test God by complaining and quarreling. They refused to believe in and trust in God.

What does Satan expect in this temptation?

This is not what Jesus is all about. He did not come to bring glory to Himself, but to His Father. Yes, He would do the spectacular and the miraculous. He would, however, to them to bring glory to God and to minister to people. He was not about to do these things to bring glory and fame upon Himself. Jesus defined His purpose on earth when He said, “For even the Son of Man did not come to be served, but to serve, and to give His life a ransom for many” (Mark 10:45).

How does this relate to us?

When we trust in Christ, we are given a number of things. These include such things as our spiritual gifts and our desire to be involved in God’s will. Often we are given a ministry. To serve God we need to remember several important principles:

I have seen too many people use what they claim to be their spiritual gift in ways that do not bring glory to God; rather they bring glory to self. This is done whenever we use our gifts to bring glory to ourselves whether it is in teaching, leading, music, or healing. Our goal and desire must be to serve God through Christ. We must allow the Holy Spirit to guide us and to use us. If we seek glory for ourselves instead of seeking to give glory to God, we are throwing ourselves off the pinnacle.

How are you serving God? Are you seeking your glory or His?

Are you trying to be a stuntman for God? Or are you simply serving Him?

Have you thrown yourself off the pinnacle? I hope your landing is better than mine was!

No Replies to "Look before you leap"