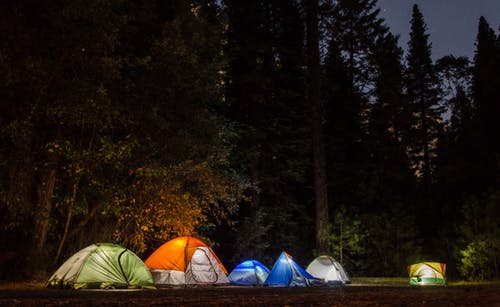 Last time we talked about numbers 2:1. The only thing I want to say about verse 1 now is it clearly indicates to us that the following verses are God’s instructions to Moses and Aaron. What I want us to notice today is the repeating pattern in God’s instructions here. Let’s take a closer look at Numbers 2:2-32. I won’t reprint all of those verses here so you will probably want to have your Bible open as you read this devotional (which is always a good idea anyway).

In this chapter God gives specific details outlining how He wants the nation to camp. He calls out the tribes by name and where they are to be positioned. He calls out each of the tribe’s leaders by name too.

The other way to understand the reference children of Israel is if you think of God as Father, which is how Jesus taught us to think about the first person of the Trinity, then from God’s perspective, all of the individuals in this nation are perceived by God to be His Children. However, even though this would technically be a correct way to understand the reference I don’t believe this new nation thought of God as their father. They saw Him as the covenant God whose proper name is YHWH (Yahweh).

When referencing this new nation YHWH often talked about them in the context of family. He used words such as children and father, as we see in this passage, and brothers or brethren in other scriptural references. It is as if God is underscoring the importance of their family lineage. It seems YHWH wanted them to be constantly aware of both their ancestors as well as their descendants.

Maybe we don’t always think about this but God designed the family, which means family is important to Him and should be to us. Where does He tell them to camp? By their own standards (flags) beside their emblem (or family crest) of his father’s house. This new nation of Israel is one big family unit consisting of twelve different tribes and further divided down to individual families or households.

God then commands that they should camp some distance from the tabernacle of meeting. The individual could not approach God directly, they needed the Levites to provide a sort of buffer zone in the camp.

God tells them they are to camp by tribe and tells them specifically which side whether North, South, East or West (verse 3). Notice the phrase according to their armies. This huge family forms a massive military force and they are arranged around the tabernacle in military fashion! Then God tells the number of military personnel in each tribe and who is to camp next to them.

The above pattern is repeated over and over in this chapter until all twelve tribes have been placed by God in the camp. They would break camp, travel, set up camp, again and again, Judah would be camped to the East and the other tribes facing exactly the same direction they were in the last time they camped. This they did for forty years!

I have been taught that when God repeats Himself or repeats a pattern we need to sit up and pay particular attention to the details. When God repeats things it’s as if He is bolding or underlining that passage of scripture.

God is truly worthy of all praise and worship!