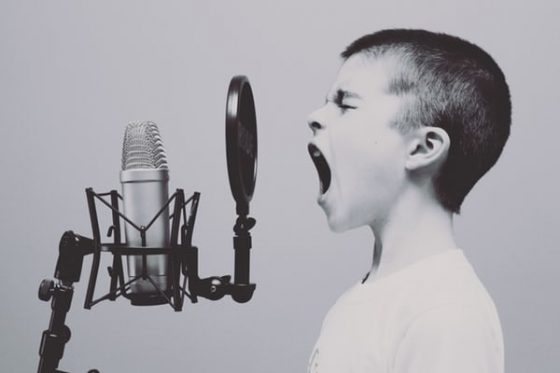 Have you ever wondered what God’s physical voice sounds like? What would it be like to have God start an actual physical conversation with you? Once waking up and getting off the floor after passing out from shock, do you think God would have your undivided attention? Do you think you’d remember the conversation? Don’t you think you’d remember every last word for the rest of your life? Imagine what Moses and Aaron must have experienced when God vocalized His thoughts to them.

I’d like to take a detailed (but not exhaustive) look at Numbers 2:1.

The first word in verse 2, “And”, indicates to us a connection with the previous verse, which happens to be in the previous chapter. Though it is clearly the Hebrew word for and I think it could almost be translated next or then. In other words, the narration of chapter one is continued uninterrupted into chapter two.

The second word, “the”, can be erased or crossed out of your Bible. It does not exist in the Hebrew and is only there because the translators (wrongly I believe) chose to translate YHWH as Lord.

The next word is “spoke” and it tells us explicitly what action the God of the universe took. He spoke. One way speech can be understood is it is the audible action by which the thoughts of one individual are made known to another. God, in a conversational exchange, was communicating not only His thoughts but as the next verses reveal, His will.

The next four words we encounter in verse one are “…to Moses and Aaron”. One hundred four times “…Lord spoke to Moses” is recorded for us in the Old Testament. In only fifteen of the aforementioned instances do we find the additional phrase “…and Aaron”. Only twice in the Old Testament do we see the Lord addressing Aaron directly without communicating through Moses as depicted in the phrase, “…Lord spoke to Aaron”. Those two times were specific to Aaron’s priestly duties.

The usual pattern for God communicating with these two men was for Him to speak to Moses, then Moses would repeat what God said to Aaron, Aaron, in turn, would speak to the people. Remember in Exodus 4:10-16 Moses was insecure about his ability to speak, so God gave Moses his older brother Aaron. Look at Exodus 4:16.

16       So he shall be your spokesman to the people. And he himself shall be as a mouth for you, and you shall be to him as God.

See the usual conversational progression? Yahweh speaks to Moses, Moses speaks to Aaron, Aaron speaks to the people. We need to resist the temptation at this point to try and immediately apply this passage to the modern Christian experience. We may be tempted to force a pattern. God spoke in His Word (Moses), the Pastor studies the Word (Aaron), the Pastor then delivers the word to the congregation (the Israelites).

I think this would be a gross misrepresentation of the text to force that correlation to our modern-day Word/Pastor/Message experience. The Old Testament model was a model of the relationship between the Lord God of heaven and a fallen covenant people of the Nation of Israel.

What’s the New Testament model for the relationship between the Lord God of heaven and the new covenant (believing) people? Look at 1 Timothy 2:5.

It is true that a very important part of our lives is, God spoke in His Word, the Pastor studies the Word and then delivers it to the congregation. However, the Pastor is not our mediator between us and God. Do not abdicate the responsibility of you getting to know Yahweh through the Pastor and his messages from the pulpit. You get to know God through the person of Jesus Christ.

Additionally, it should be pointed out that we are responsible for our own growth in the Lord. In addition to hearing good biblical messages from godly Pastors, we must read and study the bible on our own. Be encouraged you can read the Bible, and you can study the Bible. God through the Holy Spirit will help you.

God in His great love delivered His word to us in written form. We must not neglect so great a gift! God is truly worthy of all praise and worship!