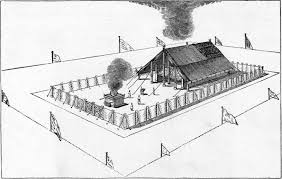 I want to spend some time looking at Numbers 7:10-11, but first some context. It would, of course, be beneficial to read all of chapter seven for context, but it would be unwieldy to reproduce it here. We should at very least consider the first verse. Verse one, I believe, is critical to understanding what’s going on in verses ten and eleven.

I’m not going to exposit verse one, but I will say take notice that the theme is the consecration of the entire tabernacle (altar, utensils, and all it contains). Anointing and consecrating something means it now has a singular purpose in the service of YHWH. In our world today we don’t think in those terms. Maybe the closest we come to setting aside items for YHWH’s purposes in the modern-day church is the containers used for communion. As an example, I’ve never seen the little cup serving platter used for anything but communion.

Keeping verse one in our minds lets peer into verses ten and eleven.

11 For the Lord said to Moses, “They shall offer their offering, one leader each day, for the dedication of the altar.”

Notice in verse ten who offered the dedication offering. That’s right, the leaders. As we continue through the chapter it becomes clear that these are the leaders of each of the twelve tribes of Israel. Here we see the leadership unified. Unity seems to be a big buzz word in churchanity today as if it is a goal of supreme importance.

There are only two ways I know of to accomplish unity between two or more parties. The first is through compromise. If you and I have opposing ideals and yet have decided we must be unified, then one or both of us must give up our conflicting ideals and focus on the things on which we can agree.

The only other way I know to accomplish unity is when two or more parties have their eyes set on the same prize and are singular in their desire to obtain the prize. This is the type of unity we see in the text among the tribal leaders.

Something I should probably point out here is the dedication offering in verses ten and eleven are specifically for the altar.

How did the leaders offer their dedication offerings? They did so according to God’s instructions as stated in verse eleven. One leader each day. The initial dedication of the altar was a twelve-day affair!

Sometimes I still have a hard time conceptualizing YHWH entering into a covenant relationship with an entire nation. A nation composed of about two million people. If you’ve ever wondered why the Jews are called God’s chosen people, it’s because God chose Israel to be His covenant people. Why? Because it was through this nation that YHWH would bring forth Jesus, the one and only sacrifice capable of sating God’s wrath. Jesus, the one and only perfect sacrifice capable of bridging the gap between God and man caused by sin.

Consider what the following New Testament verses say about Jesus.

5 Therefore, when He came into the world, He said:

“Sacrifice and offering You did not desire,

But a body You have prepared for Me.

6 In burnt offerings and sacrifices for sin

You had no pleasure.

In the volume of the book it is written of Me—

No Replies to "Numbers 7 - Tabernacle Stuff"