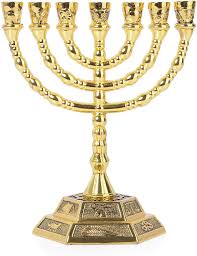 Sometimes I am perplexed by the things I read in God’s Holy Book. Sometimes it’s the simple and seemingly straightforward verses that trip me up. For example, Numbers 8:2 seems straight forward enough, however, the longer I think about it the more I realize I don’t understand it. My lack of comprehension acts as a sort of hook grabbing me by the jaws and not allowing me to move on. Let’s look at the verse, and one supporting verse, then I’ll see if I can explain my confusion (or maybe you’ll see it right off).

2       “Speak to Aaron, and say to him, ‘When you arrange the lamps, the seven lamps shall give light in front of the lampstand.’ ”

31       “You shall also make a lampstand of pure gold; the lampstand shall be of hammered work. Its shaft, its branches, its bowls, its ornamental knobs, and flowers shall be of one piece.

Do you see it? Are you frustrated too? In Numbers 8:2 YHWH instructs Aaron to arrange the seven lamps so they give light in front of the lampstand. But when we consult the construction blueprint for the lampstand we discover a certain rigidity to the lampstand, “ Its shaft, its branches, its bowls, its ornamental knobs, and flowers shall be of one piece”! I consulted the commentaries in my Logos library and none of them explained how Aaron was able to keep YHWH’s instruction, but verse three informs us he did indeed comply.

3       And Aaron did so; he arranged the lamps to face toward the front of the lampstand, as the LORD commanded Moses.

Verse 4 does not shed light on how this was accomplished but rather underscores Exodus 25:31 noted previously.

As much as it pains me, I must leave the question unanswered, and move on. In my humble opinion, this is a critical practice every student of the Bible must adopt. We dare not force answers to unanswerable questions. To do so risks skewing the meaning, bending it to our will as apposed to allowing mystery. It’s not to say we will never receive the answer. Maybe additional diligence will be rewarded with something concealed being revealed and maybe not. As faithful students of  God’s Word, we must be ok with it either way.

Consider the following excerpt from The Believer’s Bible Commentary.

8:1–4 Aaron was instructed to arrange the lamps on the golden lampstand in such a way that the light would be cast in front of the lampstand. If the light speaks of the testimony of the Holy Spirit and the lampstand speaks of Christ, then it is a reminder that the Spirit’s ministry is to glorify Christ.

Oh no! There’s a flag on the field. Let’s go see what that’s all about. I thought the Bible should be read and understood literally. Isn’t the above-quoted commentary suggesting symbolism instead of literal interpretation?

We most certainly should read and interpret the scriptures literally. But, (eh, “but” is the wrong word) and we need to realize the scripture itself, employees, the literary device called symbolism throughout its pages.

I realize I’m not establishing context (you are quite capable of doing so yourself), but consider the first three words of Hebrews 9:9 “It was symbolic…”

11       But Christ came as High Priest of the good things to come, with the greater and more perfect tabernacle not made with hands, that is, not of this creation.

One more scripture from Hebrews.

1       For the law, having a shadow of the good things to come, and not the very image of the things, can never with these same sacrifices, which they offer continually year by year, make those who approach perfect.

If you study Hebrews, specifically chapters eight through nine, it becomes clear that the entire Old Testament tabernacle and its worship system was earthly symbolism of heavenly truths. This is exactly why YHWH demanded the tabernacle be designed and arranged according to a particular pattern, the heavenly pattern.

The tabernacle, all of its furnishings, sacrifices, and rituals pointed to the person and work of Jesus Christ. In a sense, you could say there really is only one covenant, demonstrated in the Old as the tabernacle before Christ and demonstrated as the person of Christ in the New.