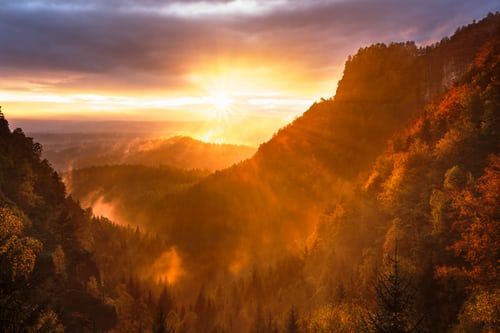 In probably most of the modern day English Bible translations we find section headings called pericopes. It is important to note that these headings were not in the original Hebrew and Greek autographs of the Bible and are not inspired. Pericopes are an invention of the translators or publishers and are designed to give brief summaries of a given Biblical section. At times I don’t agree with a given pericope, which is to say I would not have chosen to summarize that section the same way as the translators. However, there are times I think they are spot on.

I think the pericope provided by the Lexham English Bible (LEB) immediately preceding the first verse of Psalm 33 is quite good. It says, “Praise to Yahweh for His Character and Creation”.

The Psalmist commands us to “Exult in Yahweh”. By Us, I mean of course believers because the only ones made righteous by God are believers. Why are we commanded to praise Yahweh? Simply because He demands it? That would be enough for me. After all, He is the Sovereign of the universe. Beyond being the King of Kings and the Lord of Lords, He is our Redeemer. What kind of Redeemer? The one and only Redeemer who redeemed or purchased us with His blood – His very life. The Redemption by which Christ bought us out of destruction is the most unique transaction that has ever, or will ever occur. We have literally been translated out of the Kingdom of darkness and into the Kingdom of His dear Son.

However, we don’t praise God because He demands it, we praise Him because He is worthy! As the LEB has well said, we praise Yahweh for His Character and Creation.

4 For the word of Yahweh is upright,

and all his work is done in faithfulness.

God’s word is upright, it is righteous. The very word escaping His mouth communicates His righteous nature. There is no deceit or wickedness found in God and therefore only uprightness comes out of His mouth when He speaks.

Why is all His work done in faithfulness as the second half of the verse says? Because His work always follows His words. Our shining example of this principle is found in the creation account in Genesis.

Consider the first sentence in Genesis 1:3a.

So what happened after God said, “Let there be light!” Because all His work is done in faithfulness according to Psalm 33, there was only one thing that could possibly happen. The second sentence of Genesis 1:3 reveals it to us.

And there was light.

It’s not hard to believe God when He speaks! You just have to make a choice who you are going to believe. Every time Yahweh speaks the devil is there twisting and challenging God’s word just like he did in the garden of Eden, “Did God really say??”

From cover to cover the Bible is chalked full of examples of God being faithful to His word. You won’t find a single example of God not doing what He said He will do. It would be impossible for God to not fulfill His word. The skeptic is always looking for things that God cannot do. Well, I freely admit and submit that it is impossible for God to lie! God’s very nature compels Him to do what He says He will do – every time.

Verse 5 is still talking about the word of God. How do I know that? Because the verse is sandwiched between verses four and six with no break in thought.

5 He loves righteousness and justice.

The earth is full of the loyal love of Yahweh.

What an amazing God! He actually loves righteousness and justice! We say it all the time, but now we have the evidence, “God is good!”

Look at the second sentence in verse five. It makes sense to us that the Bible is full of the loyal love of Yahweh because the text tells us so. But do we stop to think about the very creation being a declaration of God’s loyal love? I believe that the motivation behind everything, yes everything God does is love. God created the heavens and the earth and all they contain out of love.

If we struggle with the concept it is because we have no other examples of such pure motivation. Is the motivation behind all our actions love? Not even close.

I am convinced that if we stop long enough to behold the Lord, by spending quality time in His word and prayer, praise will naturally follow. God is truly worthy of all praise, worship, honor, and glory. He has given me everything. Anything I could give Him pales in comparison, and yet I will praise Him! Will you?