The Word Saint – Part One 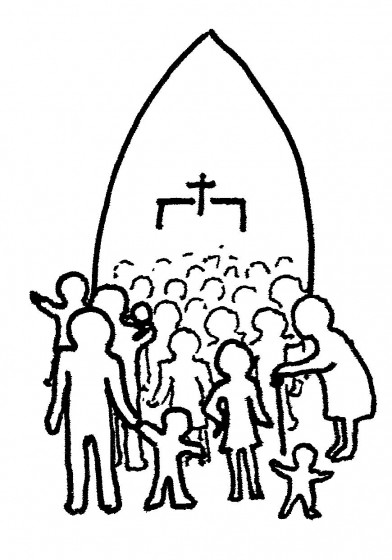 I was recently asked about the Biblical definition of the word saint. I responded with what I called a “non-studied answer” and said, “according to the New Testament, a Saint is simply a believer in Jesus Christ.” While what I said was true, I thought I’d dig a little deeper and give a more detailed answer.

Using the New King James translation, a search for the word “Saint” in both the Old and New Testaments yields 97 results in 95 verses. I went through all 97 results looking at the source language manuscripts, Hebrew for the Old Testament, and Greek for the New Testament.

I then looked up each occurrence in the appropriate source language lexicon (e.g. language dictionary) to discover the range of meaning.

It would be prudent to remember the word “saint” is an English, not Hebrew or Greek word. Too often a translated word takes on meaning derived from the cultural use of the target word selected by the translators. At times this can skew our understanding of the original source word. In other words, at times our understanding of a given word is not what the author intended to communicate. This is because we are thinking about how we use the English word and fail to consider the use or uses of the word in the source language. A good Bible study practice is to identify keywords in a passage to look up in a lexicon. Hopefully this will become clearer as we progress.

Without exception every single occurrence of the word saint in the New King James Old Testament Hebrew text, is either the word Qodesh or Hasid. I consulted multiple Hebrew lexicons and discovered the meaning of the word Qodesh to be “Holy”. And the word Hasid to be “the faithful, godly”.

If you look up the word Qodesh you discover it means holy or pure as we would expect. However, unexpectedly there is a strong influence on the word which means unique. When we say God is Holy we are really saying that God is truly unique! There is no other thing, no other being like God, He is truly unique, above, set apart from everything and everyone! What a beautiful and enriching concept surrounding God’s Holiness. I would like to challenge you to begin thinking of God as unique when you consider His holiness.

Now that we have defined the word saint as Qodesh or Hasid we can substitute the meaning of each word as we read the word saint. This will broaden our perspective on the passage without altering or affecting the meaning.

Let’s try the word substitution with the first verse in the Bible that uses the word saint.

The LORD came from Sinai,
And dawned on them from Seir;
He shone forth from Mount Paran,
And He came with ten thousands of saints;
From His right hand
Came a fiery law for them. (NKJV)

The LORD came from Sinai,
And dawned on them from Seir;
He shone forth from Mount Paran,
And He came with ten thousands of Holy [ones] or unique [ones];
From His right hand
Came a fiery law for them. (NKJV)

It is beyond the scope of this article to work through this passage (maybe we will do it another time), but I should point out that this first occurrence of the word saint is actually describing heavenly beings, not humans. Almost all, if not all subsequent references to the word saint, Old and New Testament, are describing humans.

Let’s try a word substitution with the word Hasid.

Sing praise to the LORD, you saints of His,

Here it is again with the word substitution.

Sing praise to the LORD, you the faithful, godly of His,

It was my intent to demonstrate the power and beauty of looking up Bible words in source language lexicons. Studying the word of God is time consuming and at times can be hard work. But I can think of nothing more rewarding than having a close encounter with God through His word. I hope you will build time into your Bible study to do word studies so you too can deepen your encounter with His Holy word.

No Replies to "The Word Saint - Part One"